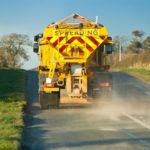 If you are in more northern climates, you are without a doubt familiar with road salt. Municipalities and towns apply salt to the roads to melt snow and ice. But the costly side effects are more than most drivers bargained for.

During the winter months, its inevitable salt will get on your car. It’s all over the roads, all over your driveway and will stick to your car. In the middle of February, you will find it stuck to not only your quarter panels and body paint, but to your undercarriage and all over your wheel and steering components.

When pulling away from a car wash in salty conditions in your vehicle, you would be lucky to get 10 feet without attracting a fresh layer of road salt residue to your auto body. Because it is spread on the road and consistently being ran over by cars it becomes pulverized. It in turn essentially becomes dust, kicked up all over roadways, especially on congested thoroughfares.

There’s no avoiding salt dust from attaching to your vehicle in the harsher climates where it is heavily used. Regardless, you need to rinse your car of salt as much as possible. Keeping your car free of salt residue prevents metal oxidation, which leads to rust on your vehicle. This oxidation generally doesn’t occur overnight, or even in over the course of a single winter season. And once oxidation has started, it’s generally too late.

Rust develops when moisture and oxygen combine on metal, a process to which salt acts as a catalyst. But you won’t stop oxidation because you start to regularly keep your car clean.
This is because the salt is reacting with the metal underneath your paint. This means once oxidation has begun on your car, road salt has already eaten through the coating, through the e-coating, the primer, and into the bare metal.

This corrosion resistance is designed as your lines of defense from your car becoming a rust bucket. But they can’t act alone; you need to do your part and routinely wash your vehicle during the winters months at least once a week. This time of year doesn’t only evoke harsh road conditions for driving, it’s also a harsh time of year for your vehicle.